No. 1 Westfield boys repeat as champion at the Union County Swimming Championships 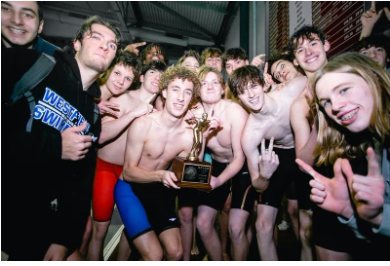 Here is the story by PJ Potter of NJ.com

Westfield owns the water in Union County once again.

Despite a decent turnover in the roster due to graduation, the defending champions of the county meet registered 466 points and six victories to keep the trophy within possession on Sunday at Rutgers University.

Ranked No. 1 in the NJ.com Top 20, the Blue Devils’ path to glory began in dominant fashion.

“This group is extremely motivated. They’ve come in with a renewed vigor and have worked so hard. It wasn’t just the center lane guys today. It was everyone contributing to begin our championship run,” Westfield head coach Jeff Knight said.

Colin Kavanagh and Danny Pierce set the tone, punching out a pair of one-two finishes in the 200 individual medley and 100 backstroke.

“That was so exciting. We came in here hyping each other up and wanted to get those wins and got it done. On the backstroke, I was really scared. I saw him catching me so I had to put on the burners,” Kavanagh said.

“There’s a lot of great swimmers in this county. It was so fun going out there today and I definitely feel like I have some big shoes to fill next year once Colin graduates. He pushes me a ton,” Pierce said, who added 34 points for Westfield.

“Owen is so focused. He’s a true pleasure to coach because his aspirations are so high,” Knight said.

Waibel also unleashed a 20.98 clip as the anchor in the Blue Devils’ 200 FR victory alongside Logan Swenson, Christian Tedesco and Mangiamele.

Summit, finishing second in the meet with 335 points, earned two wins on the day.

Sophomore Will Moon was spectacular, finishing first in the 200 freestyle at 1:43.98 ahead of Scotch Plains-Fanwood’s Owen Higinbotham (1:45.05).

“It was a pretty good race. I was exhausted but I just felt something at the end and really wanted to win that so I found one last gear. It felt great,” Moon said.

Higinbotham got the best of Moon in an incredible 500 free event, clocking out at 4:47.15 in the 4.5-second victory over Moon. About halfway through, the two stars were tied at 2:49.71 with a few legs left. Higinbotham knew he had to channel all his might to finish with the win.

“I was thinking about the earlier race in the 200 free when he out-touched. I knew I couldn’t let that happen again and I just pushed my jets and focused on my kicking a bit more there,” Higinbotham said.

In the 400 freestyle relay, Moon still had a little left in the tank. Jumping into the water as the third swimmer for Summit, Moon overtook Westfield to create enough spacing to give the Hilltoppers a win and a great final note to walk out on. Moon was joined by Kyle Dripchak, Charlie Moon and Devin Tapia in the 3:19.87 win.

“We take today as a victory. It was an awesome meet and we gave it our all,” Moon said.

Gov. Livingston scooped a win as well in the 100 butterfly. Ethan Wong (52.68) led the way in a one-two finish for the Highlanders. Caden Wong finished the race right behind him at 53.17. Ethan Wong also tallied a second-place nod in the 100 breast at 59.37.